This site is operated by a business or businesses owned by Informa PLC and all copyright resides with them. Informa PLC’s registered office is 5 Howick Place, London SW1P 1WG. Registered in England and Wales. Number 8860726

Goodyear’s concept tire never loses the tread—and could cut down on the 250 million tires Americans throw away every year.PHOTOGRAPH: GETTY IMAGES

If Goodyear scientists have their way, replacing complete tires every year or so simply because a few millimeters of rubber wears off will become a thing of the past. The company this week unveiled a far-out concept for a tire that will automatically generate its own tread, continuously replacing the rubber that sloughs off from daily use.

Called reCharge, the concept looks at how to curb the waste that plagues Goodyear’s industry: About 250 million tires were scrapped in the US in 2017. “The tire is one of the few components that doesn’t stay on for the life of the vehicle,” says CTO Chris Helsel. “It’s replaced quite often. So the first problem to solve was to make the tire more of a permanent structure, as part of the vehicle itself.”

To make that happen, Goodyear’s engineers designed something that works a bit like a stick of lip balm. At the center of the wheel sits a cylindrical, pressurized cartridge filled with liquified, biodegradable tire compound. As the miles stack up and the tread wears down, the pressure differential between the interior of the cartridge and the tire surface draws out the compound. It oozes out of channels radiating from the center to the tread surface automatically, passing through a grid-like frame that molds it into the proper shape. (The system is envisioned as incorporating both tire and wheel, with a non-pneumatic support structure instead of a tire attached to a metal rim.) When exposed to outside air—where the rubber meets the road—the compound hardens, and your tires never go bald. 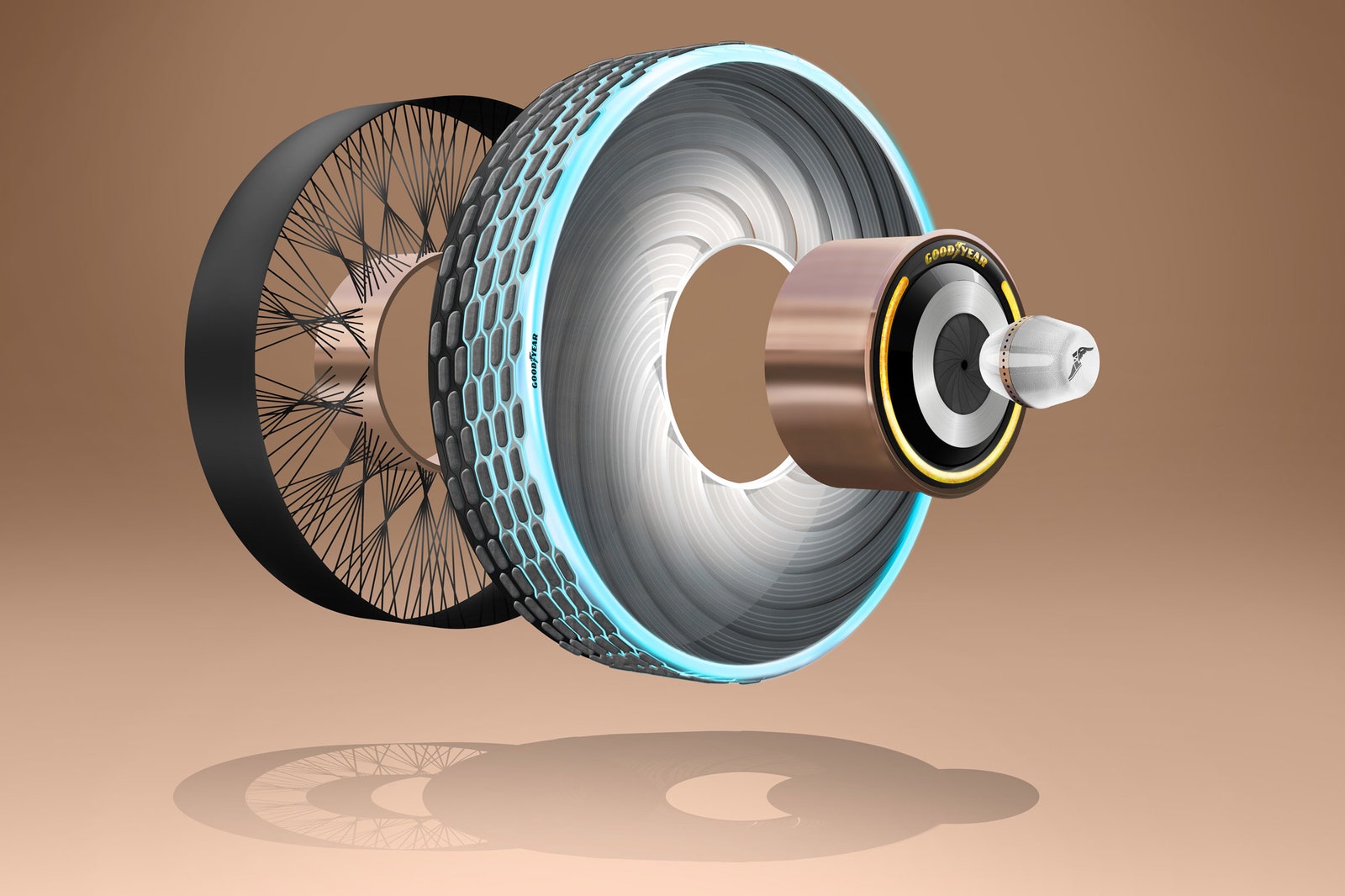 The reCharge tire is very much a concept, but some of the ideas it promotes could make it onto your car in the next few years. COURTESY OF GOODYEAR

So instead of tossing old tires every few years, you’ll keep the bulk of the structure as long as you’ve got the car. The central cartridge would need replacing a few times over the wheel’s projected lifespan of between 100,00 and 300,00 miles, Goodyear estimates. That means less waste, Helsel says, since worn down tires get tossed even if the structural components beneath the tread and in the sidewall remain perfectly intact.

The reCharge concept comes with some other neat ideas built in. Helsel says sensors embedded within the reCharge structure can analyze wear patterns and driving style, and tune the type of compound the user might install next in order for it to better match. Aggressive brakers and performance nuts would get one kind of chemistry, hyper-miling road-trippers another. Goodyear could account for climate and road quality as well.

The tire is also well suited to electric vehicles. Because they’re usually heavier than their gas-powered counterparts and apply greater torque during acceleration, they can wear out tires 20 to 50 percent faster, Helsel says. “So you’re going to need a tire that lasts longer. This idea will allow for extended tire life and much easier swaps, and replacing just the cartridge will require one tenth of the number of parts that would need replacing compared to conventional tires.”

The concept, though, isn’t near production. Goodyear hasn’t made the all-important compound, and getting it to work as described would be complex, especially the bit about hardening with oxidation. Helsel says the company envisions something including fibrous material to enhance strength, inspired by the renowned toughness of natural spider silk. But different elements of the reCharge concept could trickle out sooner than a complete product—potentially within a decade. So the proposed tire compound, the structural framework, or the embedded sensors and artificial-intelligence-based analysis of use patterns might appear earlier in conventional tires. So your tires may get smarter—but they’ll still eventually lose the tread.

INFORMA MARKETS VIETNAM COVID-19 ADVISORY: “WE ARE WORKING FROM HOME UNTIL APRIL 22”